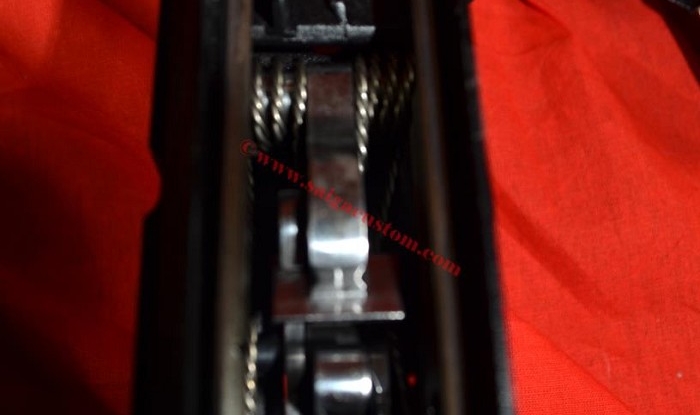 This is a new factory Saiga 12 that has been converted by our gunsmiths.

You can see that the gun was treated in the same way as my "Movie Gun" as far as the internals go and we changed the outside rail system.

Here is a list of what has been done.

First the FCG has been moved forward and a US Made FCG with a polished and re-profiled FCG has been installed for a smoother action and better reliability with low brass.

In addition an Over Travel Limiter has been installed and tuned to the gun for a fast 2nd shot follow up.

Bolt and Carrier were ground, reworked and polished as well.

The gun has a Custom Slash Front fore grip with slots and holes.  A T-Nut can be added anywhere there is a slot so that rails can be added.

The Bolt and Carrier has been reshaped and polished where it could improve the action.

The bottom of the carrier has also been jeweled.

The trigger pull is approx 4 lbs. but can be lowered by us if desired

A Hogue Overmolded Grip has been installed.

Paint has been touched up with a solvent resistant Ceramic based paint.

The rear tang has been removed and the rear of the receiver has been reshaped and an internal support block has been installed to support the ACE hardware.

Couple that with a Hogue rubber pistol grip and a Tromix Shark brake which alone reduces felt recoil by 15% and the gun is a dream to shoot.

The gun can be fired with the stock open or folded.

We then drill a 4th port in the barrel if there wasn't 4 to begin with and slightly enlarge all the gas ports to aid in the gun's ability to cycle low brass ammo such as bird shot and the low recoil stuff. We then open the gas block port to clear the 4 gas ports and add an adjustable gas knob that has been modified to work with our gas port work.

An after market reduced power recoil spring is also added.

Fire the gun, release a mag, lock open the bolt, all without taking your hand off the pistol grip.

The gun handles flawlessly as all guns modified by our gunsmiths go to the range for testing and 20 or more rounds put through them before shipping.

This is a new gun under warranty-we list it as used because it is not the way it comes from the factory.

The BHO was notched and reshaped for greater reliability and so it doesn't poke into your finger with the trigger in it's new location.