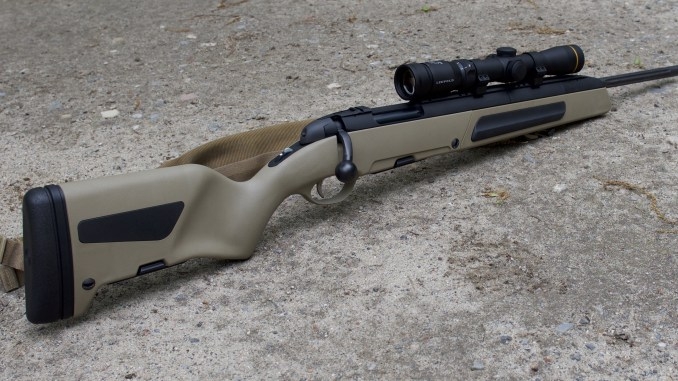 The scout rifle is a concept developed by the late Jeff Cooper.  Envisioned as the ultimate do-anything rifle, the scout rifle has a small, but extremely loyal following (most of whom I annoyed when I wrote, The Scout rifle: A one gun solution?)

The scout rifle has the following characteristics:

I’ve found the scout to be a viable concept for what I would call the ultimate truck gun.  In this post we are going to take a look at the Steyr Scout rifle, a rifle that has changed very little from its introduction in the early 90s but looks modern to this day (you can find a great history of the Steyr scout here).  It is a rifle I always wanted to own and was thrilled when Steyr loaned me this one for this review.  NOTE: Check out Richard Mann’s Scout Rifle Study for a more detailed overview of the Scout rifle.

For a rifle that was designed over 25 years ago the Steyr Scout is very modern.  The lines are sleek, it’s fast handling, and many of the features on the rifle are on current production rifles.

Take a look at the durable injection molded stock.  The adjustable spacer system is always a plus, but it doesn’t stop there.  The stock has a provision for a spare 5 round magazine as well as an integral bipod and flush mounting sling swivels.  This bad boy is ready to go.

In pictures the bipod doesn’t look particularly heavy duty, but in practice, I’ve found it to work well.

Not only does the bipod fold out of the way in use, but when it is deployed it swivels, allowing for use on uneven terrain.

Better yet, if you have a sling that’s similar to the VTAC shown above (my generation’s Ching sling), the bipod can open and close with the sling in place because the legs actually move out when you deploy it.  That kind of design feature is something that happens when you spend the time listening to end users when you design a rifle.

I’d also like to point out the trigger guard that’s molded into the stock, this is now a common feature on bolt action rifles; mostly, I’d guess, because it is cheaper to produce.  Again, another feature that’s now seen on modern rifles, yet it appeared on a stick designed in the early 90s.

Perhaps the most notable feature of the scout is the forward mounted scope.  In this case I mounted a Leupold VX R 1.5-5×33 fire dot Scout scope.  This is a really nice piece of glass and Leupold often doesn’t get the recognition it deserves.  For targets from extremely close range to distance, the 1.5-5×33 is a capable companion to this rifle.  If it breaks, no worries, the Steyr Scout comes with a set of plastic back up sights for use in a pinch.  Another feature that you’ll commonly encounter on modern rifles that Steyr was pushing in the 90s.

The Scout has a few different caliber and barrel options.  I opted for the original, a 19″ hammer forged 308 Winchester.  Note the very modern flutes on the tube in the image above.

The flush-mount 5 shot polymer magazine feeds the Scout well.  During the multiple trips to the range they worked with 100% reliability.  The magazine has two positions, the first is flush, so the magazine feeds rounds as the bolt is cycled.  The second is a by-pass (dropped-down) position, shown above, that allows the rifle to be fed through the ejection port while maintaining a full magazine for emergencies.  While this may have limited utility, I really liked this feature.

The 3-position safety is located on the rear of the tang.  In the position shown above, the trigger is on safe and the bolt is locked close.  To take the rifle off safe, the grey nub needs to be depressed and the safety wheel rolled forward.  This image also highlights some other features of the Steyr Scout: the firing pin indicator located on the rear of the bolt shroud, the swept bolt handle with rounded knob for quick manipulation and the back up rear sight, shown in the storage position.

A look at the safety in the Fire position.

The trigger on the Scout is pretty sweet.  Crisp with a consistent 3 pound 15.8 ounce break, I found it was a pleasure to use.

Prior to heading to the range with the Scout I took the time to measure the headspace; I found this rifle would close on a 1.635″ gauge and stay open on a 1.636″ for a headspace of 1.635″ plus.  This is atypical for most factory rifles.  Of the dozen or so different manufacturers I’ve measured over the last few years, most, for 308, measure in the 1.630″ (min) to 1.631″.  I assume this was by design and Steyr wanted to favor reliability with a wider range of ammunition over tighter head space.  My emails about the subject went unanswered.

Heading to the range with the Scout was a hoot.  I decided to forgo my normal, boring set of load development targets and simply zero and shoot the gun.  In the spirit of the Scout rifle concept I decided to run some drills with the Scout on an IPSC cardboard target set at 50 and 100 yards.  I fired a series of drills, each starting with the rifle at low ready, safety on.  I ran each drill 5 times and recorded the results in the table below.

Next I wanted to see how fast I could get two offhand shots downrange at 50 yards.  My average time was 3.19 seconds for the 5 trials.  That is a legit time and not much slower than I would record with a M4 and red dot sight.

I pushed the target back to 100 yards to try some alternate position shooting.  I started from the same standing position with the rifle at low ready and the safety on and scope set at 1.5X.  My average time for engaging the target from standing to kneeling was 3.82 seconds, standing to sitting 4.25 seconds, and standing to prone 4.97 seconds.  Again, these times were extremely promising.

My last semi formal test was to start standing and fire two rounds prone at 100 yards.  My average time for these shots was 8.12 seconds.  You’ll note the additional time required to shoot the second round in prone was longer than standing, I attribute this to the relatively heavy bolt lift of the Steyr Scout.  If you are used to competition rifles based on the Remington 700, you’ll find the bolt lift a little on the heavy side, that fact, coupled with the relatively light weight of the rifle and body position when shooting prone, made bolt manipulation longer than I had anticipated.

I wanted to get some sort of objective data for this article so I threw my MagnetoSpeed Barrel Mounted Ballistic Chronograph on the Scout and tested it with two different types of ammunition, Winchester white box 147 grain and and Federal Gold Medal 168 grain.

So what do I think of the Steyr Scout?

I really liked it.  I’ve been so into match rifles lately that I’ve started to drift away from the fun aspects of shooting.  The Scout helped me rediscover my roots as a rifleman.  More importantly, it broke me out of the precision rifle mold I had fallen into, even if it was only for a short time.  After my initial testing period, it now always accompanies me to the range.  I leave it in its plastic case and throw a couple boxes of 308 ball into my pack.  No crazy rituals, no 30 pound bags, or spotting scopes- just a simple rifle and some ammo.  Now, when I shoot with my friends and they want to shoot gas guns, I take out the Scout.  They seem to laugh a little, but they are always impressed when I can hang with the semi autos in many of the drills.

If you are like me and always wanted a Steyr Scout, I would suggest trying to get your hands on one.  I waited since the 90s and really wished I had pulled the trigger sooner.  I believe the Steyr Scout may be the best truck gun ever designed and it’s too bad that this is only a loaner.

To learn more about the Steyr Scout, click here.