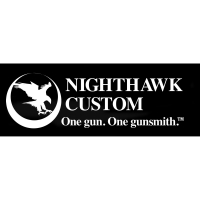 FOUNDED AND HEADQUARTERED IN BERRYVILLE, ARKANSAS...

Nighthawk Custom was formed in 2004 by a group of four talented individuals who had a true passion for the 1911 platform. As the company grew from those original employees to approximately 65 full-time employees today, our selection and assortment of 1911s has also grown. Nighthawk Custom has expanded the product line from the original two models, the GRP and Talon, to over 40 unique and custom versions of the 1911.

In addition to 1911 pistols, Nighthawk also manufactures top-of-the-line tactical shotguns based on the world’s most popular shotgun platform, the Remington 870.

Finally, Nighthawk Custom began offering a line of revolvers in 2016. These top-tier revolvers were the result of a collaboration with Korth-Waffen of Lollar Germany. Because Korth revolvers are known worldwide for their unrivaled quality and value, a partnership between Nighthawk Custom and Korth was a natural fit.

ONE GUN, ONE GUNSMITH

At Nighthawk, each pistol is built from start to finish by a single gunsmith. Our slogan and philosophy, “One Gun, One Gunsmith,” is the direct result of how we build our guns. Once a pistol is built, the builder test fires the pistol to insure that it exceeds both The Nighthawk Standard, and his own. He then uses a metal stamp to imprint his initials under the left grip panel. While this is not the fastest, most efficient, or most cost-effective way to build a firearm, this shows the highest level of ownership, and it signifies the pride and commitment our gunsmiths take in the work they do.

In addition to having the most talented gunsmiths in the industry building each gun by hand, Nighthawk also uses the highest quality parts and components to build each gun. All parts used in the pistols are fully machined from bar stock steel. This is the FM, Fully Machined Series of parts. Each part used is oversized and must be fit to each gun by hand - there are no drop-in, cast, or MIM parts used in the work we do. When the highest quality parts are combined with the most talented gunsmiths in the industry, through the process of One Gun, One Gunsmith, the resulting quality is unparalleled.

It is our privilege to work with numerous talented, hardworking, passionate individuals. Our customers, vendors, and the loyal Nighthawk team, are more than just friends; we’re family.